Jubilee Park - action to be taken

A Multi-Agency meeting was held this morning at the Fire Station in order to deliver immediate action to support the Greater Manchester Police (GMP) at Jubilee Park.

Posted by Cllr Nigel Ash at 20:14 No comments: Links to this post

Following the appalling incidents in Ashton last Sunday the police are taking the following action:

1. Four arrests have been made for the incident on Sunday night


2. Other individuals already identified by the police are to be visited by them this week. The police will consider other possible sanctions against those involved and their families e.g. in the case of council tenants imposing sanctions on them or more likely the parents.

3. The police are allocating staff to work in and around the Jubilee Park early in the evening to prevent such numbers escalating and taking a hold during the hours of darkness.

4. The police will be maintaining a presence each night to Monday 4th November and review the situation through the Bonfire night week.

5. The police have arranged for additional resources such as their Special Constables to work with them in the next two weeks in light of the difficulties in covering the park.

6. Police Community Support Officers are working with the local schools to provide inputs on the implications of being present in the park.

7. The police will be going house to house in the locality speaking to residents

8. The police have met Youth Services and are linking in with them to ensure a co-ordinated approach.

9. Media messages are being put out on twitter/face book

10. The police are considering the introduction of Section 30 Dispersal Orders.

This has been a very bad few months in Ashton for anti social behaviour. As a local Councillor I have been asking for extra policing and joint working with agencies in Wigan Council, a strategy which was successful earlier in the summer when residents of Ashton Heath were subjected to similar unacceptable incidents of anti social behaviour.

I hope that whoever threw fireworks at the crew who went to deal with the fire in question are prosecuted.I also agree with Borough Commander Sheridan when he says that parents have a responsuibility to know what their children are doing in the evening.

I am asking for a meeting with the local MP, representatives of Wigan council and  the police to find some long term solution to this problem.


Posted by Cllr Nigel Ash at 13:12 No comments: Links to this post

National Grid Gas will commence urgent works to repair a gas leak on Sunday 29 September 2013 on this junction. Temporary traffic signals will be in place until the work is complete and delays are expected.

Furthermore, traffic will be prohibited from turning right out of into and will need to divert via and .
Posted by Cllr Nigel Ash at 11:01 No comments: Links to this post

As a part of the local Labour Councillors' ongoing campaign to improve unadopted  roads and back alleys in Ashton we were happy to fund the upgrading of the back alley behind houses at the top of  Bolton Road. Unfortunately we do not have enough to fund all the improvements needed in Ashton at once but we are committed to find funding on an annual basis and will be looking to improve an area from next April in the new financial year.

Posted by Cllr Nigel Ash at 12:31 No comments: Links to this post

Campaigning to Save our Royal Mail

I was happy to join with the mayor and other Councillors in welcoming  CWU delegates to Wigan who are conducting a nationwide campaign  against the privatisation of the Royal Mail.

If you wish to get involved please go to  http://www.cwu.org/save-our-royal-mail.html
Posted by Cllr Nigel Ash at 12:18 No comments: Links to this post

Changes to Ring and Ride Bookings

With effect from 5th August 2013 booking and scheduling staff will be transferred from the Wigan depot to the main call centre in Manchester. This means that from the 5th August passengers will be able to:


Posted by Cllr Nigel Ash at 11:58 No comments: Links to this post 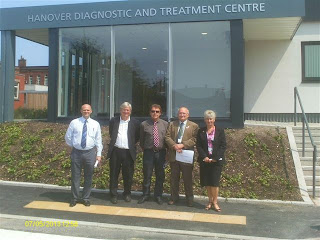 In my role as Chair of Adult Health Social Care  Scrutiny Committee I think it is important that the committee get out of the town hall and see what is happening on the ground. We recently visited the  newly Hanover Diagnostic and Treatment Centre at Leigh Hospital. This state of the art building has the following services on three floors:

Members of the committee were very impressed with the building and how welcoming it was both in decoration  and the attitude of the members of staff. They were also impressed with the fact that a patient could be diagnosed and treated in the same place without having to go to different buildings within the Trust.
Posted by Cllr Nigel Ash at 11:40 No comments: Links to this post