Author Steve Hartley visited the library in February as part of the Children’s Literature Festival. Approx 60 children attended from St Thomas’ school who had an absolutely amazing time.

The library has has facilitated 5 class visits with 201 children in total and one re arranged for March.

They now run a joint monthly Family Fun and Craft session with the Children’s Centre which was very well received with approximately 30 attendees.

Easter holidays activities include an Under 5s party and pottery with the Clayman.

Interest has been shown already on the advertised forthcoming Universal Jobmatch course which will be run by ACL and will hopefully be in place for April.

Posted by Cllr Nigel Ash at 16:56 No comments: Links to this post


Electricity North West have commenced emergency work to repair a major hv cable fault at the junction with Bryn Road South.In order to carry out the work safely temporary traffic signals will be in operation for the duration of the works.

Posted by Cllr Nigel Ash at 16:28 No comments: Links to this post

The opening of the revamped Ashton post office has been delayed due to unforseen circumstances. The expected re-opening date is now Saturday 30 March 2013.
Posted by Cllr Nigel Ash at 12:57 No comments: Links to this post

Protest against the Bedroom Tax

Last Saturday in Ashton town centre I took part in an event organised by local Labour Councillors protesting against the bedroom tax.

This tax can have come from the Tories who are steadily becoming the nasty party again. This tax will hit roughly 5,000 households in the Wigan borough and affected households will lose between £14 and £25 a week.

The people affected are on very low income already. 2/3 thirds  of households hit are home to someone who is disabled. Divorced parents whose kids come to stay will be badly affected as well grandparents who want their grandchildren to stay with them but now will not be able to do so because of lack of space. 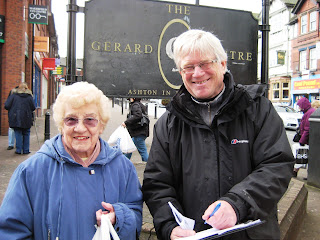 The Tory led Government want people to move into one or two bedroomed properties form their existing 'under occupied 'properties. The problem with this is that in Wigan there are only 852 such properties available and the demand is over double that.

Many people who signed our petition said they  were not affected by the bedroom tax but were keen to express their opposition to this blatantly unfair tax.
Posted by Cllr Nigel Ash at 15:57 No comments: Links to this post


Wigan Borough Clinical Commissioning Group gave its support to the development of a new health facility in Ashton at its January Board meeting. Due to the major changes taking place in the NHS from 1st April, this scheme will now be progressed by NHS Property Services Ltd who will be taking a lead on the majority of developments of NHS property.

The CCG remain committed to supporting the Ashton development and will continue to work with NHS Property Services Ltd to move the scheme forward as quickly as possible. The preferred site for the new development remains Ashton Town Hall and we will be working with NHSPS and the Local Authority to secure the site if the scheme is formally approved.

Posted by Cllr Nigel Ash at 15:15 No comments: Links to this post


News came last week that BT will be installing new fibre cable optic cabling in Ashton and Atherton as part of a £2.5bn regional roll out. 40,000 homes across the area will be able to get this service as a result of this investment. This means that anything that can be done online both for businesses and an households will be able to be done quicker. It also shows that a big company like BT have got confidence in this area for them to make such a massive investment.
Posted by Cllr Nigel Ash at 09:35 No comments: Links to this post 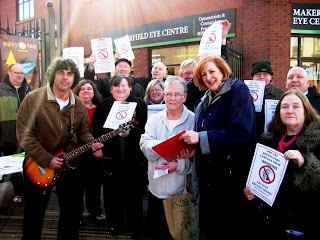 I was delighted to see in the news yesterday that The Office of Fair Trading has given the UK’s much-criticised payday lenders just 12 weeks to clean up their act or be shut down. It is also planning to refer the industry to the Competition Commission.

In a damning report published this morning after a 12-month review of the sector, the consumer watchdog said its investigations revealed evidence of widespread irresponsible lending and lenders failing to comply with the standards required of them.

It proposes to refer the payday lending market – where short term loans are charged at APRs higher than 4000% - to the Competition Commission after it found evidence of deep-rooted problems in how lenders compete with each other.

Clive Maxwell, OFT chief executive, said: “We have found fundamental problems with the way the payday market works and widespread breaches of the law and regulations, causing misery and hardship for many borrowers.

“Payday lenders are earning up to half their revenue not from one-off loans, but from rolled over or re-financed deals where unexpected costs can rapidly mount up.

“We are proposing to refer this market to the Competition Commission, which has wider powers to get to heart of the problems in this market and to identify and impose lasting solutions that protect consumers.”

The OFT review found evidence of problems throughout the lifecycle of payday loans, from advertising to debt collection, and across the sector, including by leading lenders that are members of established trade associations.

Particular areas of non-compliance included: lenders failing to conduct adequate assessments of affordability before lending or before rolling over loans; failing to explain adequately how payments will be collected; using aggressive debt collection practices; and not treating borrowers in financial difficulty with forbearance.

The OFT didn’t name and shame any particular firms, but damned the whole industry by demanding that the fifty leading lenders, each of which was inspected, must take rapid action to address the OFT’s concerns.

They must demonstrate within 12 weeks that they are fully compliant, or risk losing their licence. Failure to cooperate with this process will trigger enforcement action.

“Irresponsible lending is not confined to a few rogue payday lenders – it is a problem across the sector,” said Mr Maxwell. “If we do not see rapid, significant improvements by the 50 lenders we inspected they risk their licences being removed. Payday lending is a top enforcement priority for the OFT.”

Posted by Cllr Nigel Ash at 15:05 No comments: Links to this post 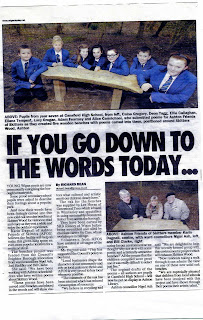 Visitors to Skitters Wood will notice new benches with  poems carved. into them written by local school children.

The idea came from Karin Dagnall and Ashton Friends of Skitters Wood who have been working with Ashton school children to write poems about Skitters Wood. The project was highlighted in last Tuesday's Wigan Evening Post - see picture above.

Posted by Cllr Nigel Ash at 12:49 No comments: Links to this post

During January the basic computer course has continued to be a success. There has been full attendance at the sessions with 8 people attending each week.

Ashton Sure Start Children’s Centre was inspected by Ofsted who observed a library Under 5s session. The inspector  was very positive about the way it was progressing.

Visitors numbers were affected by the bad weather we experienced during January. There were 11,392 visitors to Ashton Library, issued 6,789 items and handled 1,608 enquiries, while 428 people attended 32 events and 1,248 people spent 1,003 hours on the public access computers. Volunteers contributed 6 hours work in the library.


Posted by Cllr Nigel Ash at 13:08 No comments: Links to this post