Lighting in the town centre

Following my meeting with Wigan Council regarding CCTV cameras and lighting in Ashton I have been told today that the upgrading of the lighting in the town centre around the library is now "work in progress" and should be completed this week
Posted by Cllr Nigel Ash at 12:47 No comments: Links to this post 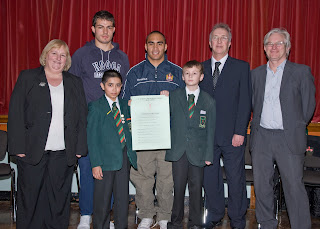 The school is leading the way towards a tidier borough and is the first secondary school in the borough to tackle their litter problem with an innovative eco-promise made by all pupils and staff.

Two players from Wigan Warriors supported the school’s anti-litter pledge and presented the eco team with a signed rugby ball as a reward for their commitment to the local environment.

The council’s deputy leader and environment champion Cllr David Molyneux, as well as the cabinet champion for young people, Cllr Susan Loudon, were also there to see the work done in school for themselves.

“It costs Britons £450 million a year to clean up litter and about £1million here in Wigan Borough. Add in the effect of visitors seeing our streets looking messy and maybe taking their custom elsewhere, and the cost to the local economy mounts up. I am delighted to support the efforts of St Edmund Arrowsmith in tackling this problem.”

Edmund Arrowsmith currently have a silver Eco-Schools’ award and are now applying for their Eco-Schools green flag award. They are on course to be the first secondary school in Wigan to achieve green flag status. Eco-Schools is an international awards programme and schools can work towards receiving a bronze, silver or green flag award run by Encams (Tidy Britain).

Already the school has invested in energy efficiency technology to monitor gas, electricity and water use, it uses eco-friendly cleaning products and has adopted a ‘switch off when not in use’ policy. Their future plans include developing the woodland areas around the school and pledging to recycle more.

On Thursday 5 and Friday 6 March, no litter was collected from around the school. This shock tactic aims to demonstrate how messy the area can become and encourage everyone to bin their rubbish properly.

The council’s environmental education team have been in school, working closely to assist in developing pupil’s social responsibility for their communities, The team are also helping the school toward its next green flag award.
Posted by Cllr Nigel Ash at 12:36 No comments: Links to this post 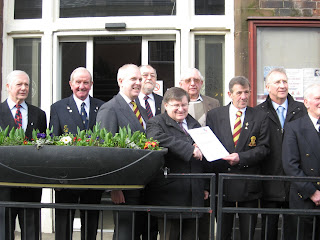 
At every Remembrance Day parade I have attended, the local British Legion have saluted a Victoria Cross on parade which was won by a local man William Kenealy. Last year I also received the following anonymous e-mail:

I recently visited St Thomas's Cemetery and noted on the war memorial ' Pte Wm Keneally VC Lancashire Reg .and following a little research found he resided in Ashton . Born in Wexford 26 December 1886 Won the VC for his heroic action at Cape Helles Gallipoli 25 April 1915 and died in Ashton on 29 June 1915. The only worthy note of him is in St Thomas's Church Yard I thought there may have been some other note of him in his " Home Town " but we do not even have a Street named after in any Wigan district

And so I contacted Mel Lee of the local British Legion who told me:

William Kenealy's great-great nephew parades the VC at our two ceremonies every year - he is one of our members (Mick Kenealy) The VC was one of 6 awarded to the Fusiliers during the storming of the beach in which they lost half of the Battalion. Military men refer to these medals as 'the six before breakfast.' The battle was the battle of Gallipoli.

I agreed with the correspondent who pointed out that there was nothing in Ashton to remember this brave man's achievement so I wrote to the British Legion's HQ in London and to the leader of the Council - both agreed to support some kind of memorial to William Kenealy.

The culmination of all this correspondence was that last Friday members of the local British Legion together with Colonel Mike Glover from the Lancashire Fusilliers museum in Bury, Ian McCartney MP and myself presented a letter to Deputy leader David Molyneux asking Wigan Council to commemorate William Kenealy in some way in Ashton.

If you would like more information about William Keneally you can log in to
http://en.wikipedia.org/wiki/William_Keneally
Posted by Cllr Nigel Ash at 16:17 6 comments: Links to this post 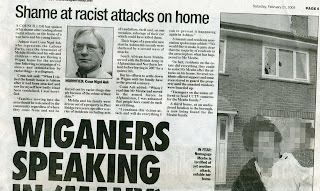 It is with a great deal of regret that I have to report that there was a truly terrible racist attack on a house in Stubshaw Cross last month. I was very much hoping that this vicious attack on an innocent family's house would not be racist but the more I talked to people the more it became clear that it was.

Apparently men in balaclavas came to the house pictured above and broke every window at the front of the house forcing the family to flee. When I went to visit the house I was appalled at the level of destruction - the windows were not just broken but smashed in.

And the reason for the attack was that the family were non-white. What makes this even more sickening is that the father of the family has served as a soldier in the British Army and had fought in Afghanistan.

I don't usually put motions down at Council meetings but I felt so strongly that an anti-racist message should be sent out from all parties in the Council as well as Wigan Council itself that I tabled a motion at last week's Council meeting deploring all forms of racism and committing the Council to combating racism throughout the Borough. This motion was supported by all parties in the chamber, apart from one Councillor Robert Brierly from Hindley Green who abstained.

I have also requested a high level meeting of Council officers, members of the cabinet, the police, Wigan and Leigh housing to explore ways that can be taken to combat racism and other forms of bigotry in the Borough so that we can prevent incidents like this happening again.
Posted by Cllr Nigel Ash at 15:42 No comments: Links to this post