I have recently been asked to comment by the press about Ashton market. I, like many other residents of Ashton and stall holders are concerned about the future of this market.

I am a member of the Ashton Bryn township Economy and Transport group which regularly discusses how to regenerate the market. One of the suggestions that the group has made is to reduce the rent paid by stall holders. I was delighted to learn last week that the rent has been halved until Easter. Hopefully, this measure will attract more traders to the market.

On a broader point, lots of local people say to me that they liked the market when it was thriving in the past. But unfortunately this nostalgia does not help the market in 2009 - the same people who tell me this do not use the market now.

I would be interested from readers of this blog and market stall traders what would attract them back to shop on the market and what I, as a Councillor, can do in partnership with Wigan Council to help regenerate the market.
Posted by Cllr Nigel Ash at 11:53 4 comments: Links to this post 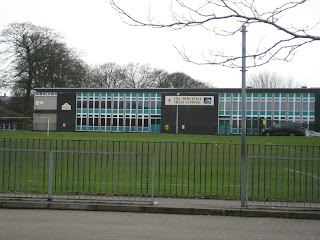 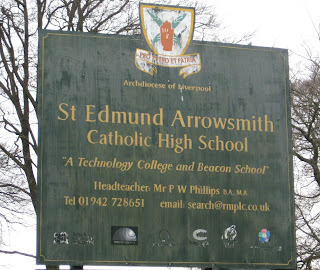 Pupils from St Edmund Arrowsmith schools came first in Team Talk - a public speaking contest in which schools from all over the Wigan Borough took part.

Byrchall High School has recently been awarded International School status for their work with other schools in Africa and Europe.

My congratulations go to the pupils and staff involved in both these projects for winning these awards.
Posted by Cllr Nigel Ash at 11:29 No comments: Links to this post 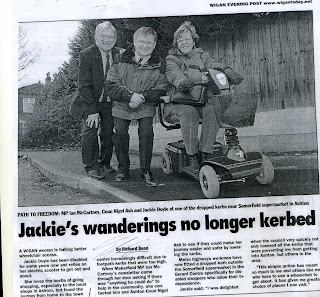 The above article appeared in the Wigan Evening Post recently. It highlights my successful attempt to get pavement kerbs lowered to enable a local resident who has to use an electric scooter to get from her house to Ashton town centre more easily. I must say that Wigan Council's Engineering Department was very quick to respond to my request and to consult Mrs Doyle as to where she thought the best places were to lower the pavements.

I would be happy to help any other resident who has to use an electric scooter to get about and who is having difficulties in accessing local amenities
Posted by Cllr Nigel Ash at 19:54 No comments: Links to this post

NHS Ashton Leigh and Wigan is taking its new Lose Weight Feel Great weight management service on the road. A roadshow will promote the initiative to people registered with a GP and living in the borough.

The initiative offers a range of weight loss services which combine healthy eating, physical activity and motivational support.
Posted by Cllr Nigel Ash at 10:00 No comments: Links to this post

I recently took part in a survey to find out the profile of Councillors and how they saw their role. Here are some of the findings from the survey's final report.

2. The proportion of female councillors has increased from 27.8 per cent in 1997 when the last census was carried out.

4.96.6 per cent of councillors were white and 3.4 per cent came from an ethnic minority background.

While I fit exactly the profile of what most Councillors are like in the UK ie about 59, male and white it concerns me that people in general are represented by such a narrow section of the population and leads me to ask why individuals who do not fit into this category do not stand as Councillors. Is it because:

a. they do not think it is a worthwhile thing to be doing

b. they don't want the hassle

c. they haven't got the time

d. they can't afford it financially

e. they are not encouraged to stand

f. they see the Council chamber to be dominated by 60 something year old white males and that puts them off.

I would be interested in reader's views about this issue
Posted by Cllr Nigel Ash at 09:26 No comments: Links to this post

Wigan council will be carrying out carriageway resurfacing works at the above location commencing on Sunday 15 February 2009.

Due to safety reasons it is considered impractical to attempt to carry out these works and still maintain a safe flow of vehicular traffic. It is for this reason that a road closure (incorporating a local diversion) is having to be implemented.

The programme of works is as follows,

York Road South will be closed on Monday 23 February 2009 :– for the removal of the existing road surface, the laying of the first layer and the final layer of new road surface material.

All householders in this area should have been notified of the closure and alternative arrangements for access to their premises.
Posted by Cllr Nigel Ash at 17:46 No comments: Links to this post

As was reported on this blog in December the new Christmas tree was vandalised not long after the lights were switched on.

Naturally I was very disappointed that a) someone would want to destroy something that should give pleasure to many people and b) the fact that no-one was prosecuted for that act of vandalism despite it happening in the middle of the town centre in a spot where the CCTV cameras could have been used to identify the culprits.

Since then I have visited Central Watch where all the images from the CCTV cameras can be seen from across the Borough. I have also been photographed by the CCTV cameras in Ashton town centre to find out for myself what the quality of the pictures taken at night time is like.

As a result of the above I have suggested that the following steps are taken for next year.

2.I have requested the lighting in front of the library to be upgraded.

I hope these two measures will prevent a repeat of last year's unfortunate occurrence.

.
Posted by Cllr Nigel Ash at 15:18 No comments: Links to this post

Award-winning scriptwriter Jimmy McGovern is set to appear in this year's Wigan and Leigh annual literature festival. The Liverpool-born writer, who has created a string of acclaimed TV dramas including Cracker, The Lakes, Sunday and The Street, will be interviewed by Julian Jordon and audience members as part of the Words '09 festival.

He will be at Ashton Library on Saturday, April 18 to take part in a question and answer session.

For more information about the festival visit www.wlct.org/whatson or call 01942 825 677.
Posted by Cllr Nigel Ash at 17:25 No comments: Links to this post

Local Authorities that signed up to participate in free swimming for young people aged up to 16 and people aged 60+ were eligible to bid for capital investment to modernise and enhance their swimming pool facilities.

Accordingly, Wigan Council is eligible to apply for capital funding to modernise and enhance their swimming pool facilities and in October 2008, the Cabinet agreed to submit bids to the Free Swimming Capital Modernisation Programme for the following three pools:

Officers of the Trust are now working on an application for increased funding which has to be submitted to Sport England by 2 March 2009. If the stage 2 application for Ashton Leisure Centre is successful, it will result in £600,000 of investment in the swimming pool, the pool changing rooms and foyer of the leisure centre. This investment will likely be spent between December 2009 and March 2010 and will involve a period of closure for the pool.

The current proposals for the modernisation and enhancements to the pool and ancillary facilities at Ashton Leisure Centre are as followed:

• Improved ventilation to the pool halls and changing rooms including new air handling plant and the cleaning of all associated ductwork.

I will report on future developments on this blog.
Posted by Cllr Nigel Ash at 17:12 2 comments: Links to this post 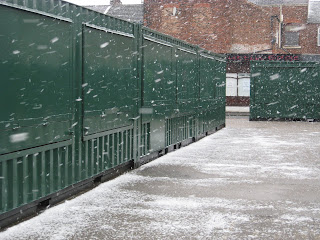 With the recent bad weather I have had several complaints from people using Ashton market that it is not gritted sufficiently and can be very dangerous.

Last Wednesday I raised this subject at Wigan Council's Environment Panel and was assured that there would be in the future enough grit for stallholders and the market manager to make the area safer.

Would readers please let me know if this is not the case.
Posted by Cllr Nigel Ash at 17:49 No comments: Links to this post