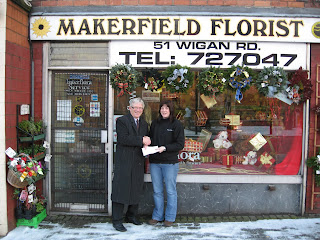 Pictured above is Samantha Rigby proprietor of Makerfield Florists (www.makerfieldflorists.co.uk) being presented with the first prize for the best dressed Christmas window in Ashton town centre. The Shimla Spice restaurant Ashton donated the prize which is a meal for two.
Posted by Cllr Nigel Ash at 08:55 3 comments: Links to this post 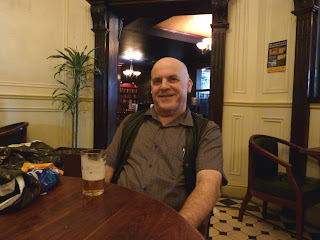 It was with great sadness that I learned of the death of Dave McKendrick last week. Dave was a very good friend of mine whose support during a bad time in my life I will always remember. He always had time for me when I needed advice or just to have a laugh with.

Motivated by his strong sense of social justice and caring for people Dave was a life long Labour supporter and a party member for over 20 years. He was a very active member of the Ashton branch and together with his wife Sue would always take a leading role in election campaigns, delivering leaflets and canvassing for candidates at local and national elections. For many years he was the Branch Treasurer for the Ashton branch and was agent on several occasions for local candidates.

Dave cared deeply for the town of Ashton. It was through his drive and enthusiasm that Captain's Lane Community Centre is now the success it is, being used by many different local groups and is a great asset to the community of Ashton. Together with his wife Sue he devoted many hours of his time voluntarily to make Captains Lane the thriving centre it is today.

He cared passionately for the local environment and played a leading role in the renovation and development of Ashton Heath. He would spend many hours working on his beloved Heath and doing environment improvements on the Three Sisters.

Dave was an individual who did make a difference to the local community. His work can be seen on Ashton Heath, the Three Sisters and at the Community Centre in Captains Lane. He will be sorely missed by the people of Ashton and my sincere condolences go out to Sue, his wife, and his family.

He really was a great bloke, one of the best and I will miss him very much.
Posted by Cllr Nigel Ash at 11:59 2 comments: Links to this post

The initial telephone sales pitch often features hyped-up claims about burglaries in the area, designed to feed off people’s natural fear of crime.

Fitting of the alarm is said to be free with a charge for the monitoring and servicing of the system, but that can run into thousands of pounds.

Claims are also made that the alarm system is part of a Government scheme, in response to the British Crime Survey. However, Wigan Trading Standards warns this is simply a trick used to get a foot in the door.

“We would urge people to be on their guard. Don’t buy anything based on a cold call and if you intend to make a major purchase always research the market and get quotes from reputable companies. If you have a complaint about a business or an individual trader, the first port of call should be to Consumer Direct on 08454 04 05 06, who will offer appropriate advice.”


Wigan Trading Standards is keen to point out that consumers have a legal right to cancel any contract within seven days – known as the ‘cooling-off’ period - whether it is made at their own home, at someone else's home, or at their place of work.
Posted by Cllr Nigel Ash at 22:10 No comments: Links to this post

1. It is a good example of an early 20th century former lecture hall and library constructed at the expense of the benefactor Andrew Carnegie and displays significant architectural presence

2.The building possesses a variety of original fixtures and fittings within an internal layout which is little changed despite some modernisation
Posted by Cllr Nigel Ash at 22:01 No comments: Links to this post

Update from the local neighbourhood team

This is what your local neighbourhood team has been doing in Ashton during November. If you think they could help solve a problem near you just contact me on 736216

Following reports of dog fouling and litter problems in the St Oswalds Road area extra cleaning has been arranged and a letter drop was undertaken to residents of St Oswalds Road, Townfield Avenue/Elmwood and Oakwood Avenue advising them of the problem and penalties for dog fouling


The team has organised a litter campaign focused on Ashton Town Centre. To date publicity has been in the press and fixed penalty signs have been displayed.The Campaign was launched at a market stall on Tuesday 1st December and is now featured on the Council’s website (http://www.wigan.gov.uk/News/BananaSkinMan.htm?utm_source=feedburner&utm_medium=feed&utm_campaign=Feed%3A+WiganCouncilNews+%28Wigan+Council+News%29)

Banana Skin Man, a Town Crier, Police and Neighbourhood Officers patrolled the streets giving advice and information (as well as free stubbies and poop scoop bags) and 1 fixed penalty notice was issued. In addition, the RSPCA offered free dog micro chipping and 10 dogs benefited from the service. The Team was on the Market stall again from 10am-2pm on Saturday 5th Dec.

Seven incidents of graffiti have been removed from Hilton Street, York Road, Edward Drive and the Queens Nightclub. Further sites have been identified in Ashton Town Centre to be dealt within the forthcoming environmental campaign.

Several incidents of fly posting on the highway have been responded to by cleansing in and around Ashton. The posters have been removed and the displayed Computer company details will be passed over to the Highways Enforcement Officer.

The team have dealt with 8 jobs in the ward this month: a defective manhole at Park View has been reported to United Utilities for their attention.

They have also received a number of highways enquiries from residents of adjoining unadopted streets and it was explained to these residents that Wigan Council do not maintain unadopted highways.

Gating consultation has been completed at Flora Street and gates are due to be erected at Queens Avenue, York Road, Princess Road, Violet Street, Heath Road and Ladysmith Avenue.
Posted by Cllr Nigel Ash at 21:39 5 comments: Links to this post