1. Will I leave the Labour Party and go Independent?

No to the first question despite recent events.

I have a problem with the concept of being an Independent politician. While they may be effective for individual issues within a community and do not have to answer to a party whip the fact that they are independent seems to stop them from having a coherent policy on major issues.

The situation in the Council chamber is a good example of this lack of cohesion. There are three groups of Independents- Community Action, the Independents and the Independent Conservatives. If you asked them what their policies on say education or any other major issues that effect most people they would all say different things. I even believe that within their own grouping they have different ideas. Nothing wrong with that but I firmly believe that people want to feel that Parties have coherent policies if they are asked to vote for a party and not be confused by them. Again I attended the Parliamentary hustings on Sunday night and even the two Independents there could not agree on policies.

2. Would I vote against the Labour Whip?

Yes if I felt that the issue under discussion was not to the benefit of the Ashton ward. Not long ago I campaigned strongly against development in the Stubshaw Cross and lobbied Cabinet to oppose the development which eventually was rejected. If this issue had come to Council I would have voted against it.

Well this is only partly true. I have produced two leaflets since March - one was produced at Douglas Printers in Wigan and the other outside the area. My out cards are also produced by Douglas printers.

My second leaflet was part of a national print run procured by the national Labour Party which offered considerable benefits to those local constituencies taking part.

I would also point out for a local election a candidate can only spend by law roughly £900 to £1000. I strongly believe that during a campaign the electorate should be contacted as often as possible within the permitted budget.

Yes I do agree that there should be a four way junction at junction 25. I also support the scheme for the A5225.

5. I agree with the post about quangos and I am disappointed that more of these have not disappeared under this Government.

I am waiting for the exact figures about how many police officers and PCSOs are detailed to patrol on Friday and Saturdays.

I would like to see more police at the weekends in the town centre. Together with the other councillors I have regular meetings with the police to discuss ways of reducing anti-social behaviour in the Ashton ward

And last but not least

I thank Alan for his comments about this blog. And so I say to all my readers - make sure to vote for me becasue if I am defeated this blog will disappear.
Posted by Cllr Nigel Ash at 10:35 No comments: Links to this post 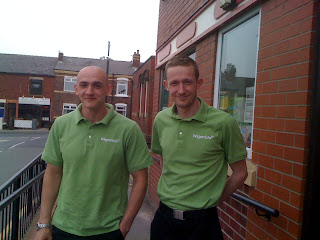 The borough’s three main town centres of Wigan (including Wigan Pier Quarter and Robin Park), Leigh and Ashton will soon be home to 15 Life Guides. The two working in Ashton are pictured above.

The Guides will be on hand to help residents and visitors find out where to go, what to do and what events are taking place, as well as generally promoting our borough.

Wigan Council’s Cabinet Champion for Regeneration and the Environment, Cllr David Molyneux says: “The Life Guides will be based in the town centres to provide information on the local area and upcoming events. They will be an extension of our town centre management function and will help to make the areas more accessible to visitors and residents alike.”

The Life Guides are funded by the Department for Work and Pension’s Future Jobs Fund. They will be employed by Groundwork Lancashire West and Wigan and will receive full training in health and safety, first aid, stewards’ training and training from the North West Tourist Board.

If you see them say hello from me.
Posted by Cllr Nigel Ash at 16:56 3 comments: Links to this post

Your candidates for the general election

The candidates at the general election for the Makerfield Constituency are as follows:

I have been asked by Scope if our local polling stations are accessible for people with disabilities. I will be looking into this issue but if anyone reading this has encountered a problem with accessing their polling station please contact me.
Posted by Cllr Nigel Ash at 15:49 No comments: Links to this post

Some sad individual or individuals has/have been stealing and destroying our Labour posters. It reminds me of my student days.

I would offer a reward for their return but the party is so hard up we can't afford it. So if anyone knows where these posters have gone I would be grateful for any information. The reward is a personally signed copy of my election leaflet. I have contacted the police and a Sergeant B. Stickers has been assigned to the case.

And on the subject of the colour of the CAP poster the words 'lurid yellow' were used by the person who complained to me. I don't think the posters are lurid yellow or turgid yellow or even motorway jacket yellow. I think they are just yellow.
Posted by Cllr Nigel Ash at 15:30 3 comments: Links to this post

Where have all the posters gone?

There were lots of Community Action posters on the bridge on Bryn Street in Ashton Town Centre up until today but they have all disappeared.

Is there a reason for this? Could it be that CAP has acted upon the complaints I have received that these lurid yellow posters are spoiling the town centre.

I think we should be told.
Posted by Cllr Nigel Ash at 11:10 5 comments: Links to this post

The Beat it Team comes to Ashton

The Beat it team will be in Ashton from the 7th to the 11th June. If you know of any areas that need a major clean up please contact me and I will pass the information to the Team
Posted by Cllr Nigel Ash at 19:35 4 comments: Links to this post

Following the clean up at the Viridor Wood car park off Bolton Road I have been asked about installing a No Dog Fouling/Litter sign there.

I will update readers of progress made on this issue.
Posted by Cllr Nigel Ash at 13:36 2 comments: Links to this post

I will be standing as the Labour Party candidate in the local elections on the 6th May and if any reader of this blog would like to ask me questions about local issues and what I will do for Ashton if elected I will be happy to answer them.

1. I would prefer any questioner to give their name

2. The questions should be reasonable and preferably be about local issues.

If you wish to ask the Labour Party candidate a question about her policies, local and national, then you can contact her by email at yfovargue@aol.com or on her website yvonnefovargue.com
Posted by Cllr Nigel Ash at 13:12 17 comments: Links to this post