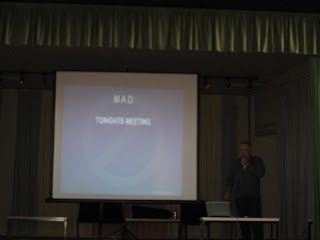 Last night I arrended a meeting organised by M.A.D. (Makerfield Against Development) to hear residents' views regarding the LDF plans for the Stubshaw Cross area. These plans include:

a. the building of industrial units on the land behind Stubshaw Labour Club
b. the building of a new high school with sports field to replace Cansfield and Byrchall High School
c.both a and b subject to the southern section of a relief road for Ashton from A58 Bolton road to Bryn via Lockett Road - see map below. 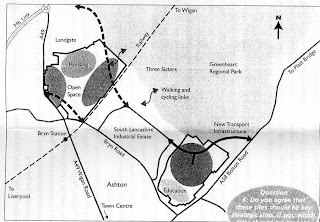 The vast majority of those present were against this proposal and the only person who spoke for it was Cllr Donald Hodgkinson.

I oppose this part of the LDF plan for the following reasons:

1. I do not believe that building industrial units on this land will give many employment opportunities. I have visited large warehouses which are run by very few staff. Furthermore as was pointed out in the meeting, there is a lot of spare capacity in the existing warehouses on the South Lancs Industrial Estate

2. The building of industrial units and a new school is subject to an agreed masterplan and delivery of the southern section of a relief road for Ashton.I do not believe that this will bring traffic relief to Ashton and there have been no traffic studies to prove this. However there is a report in existence, entitled Ashton in Makerfield Northern Bypass commissioned by Dr John Holden of the Highways Agency which came to the the conclusion that this road would do nothing to relieve the traffic in Ashton. He also concluded that an all ways junction at junction 25 would not help matters. One of the reasons the last development proposed by Patrick Properties failed was because the road suggested in the plan would have done nothing to relieve the traffic problems in Ashton

3. The plan mentions a new school. At the time of writing there is no new school or plans for one. Ashton secondary schools will be part of the Government's Building Schools for the Future plan which is at present at the first stage of consultation. According to the consultation document produced by the Council Ashton schools will be in the third stage. Local Councillors, the MP and the public have not been shown options regarding what will happen to secondary schools in Ashton, so to talk about a new secondary school in the Stubshaw Cross area is very premature. Ths has been acknowledged by the Education Department in an e-mail to me

4. If phase 3 of BSF comes about and a new school is to be built in Ashton (which I will emphasise again is far from certain) I would not want to see it built in the Stubshaw Cross area. I would want to see it in a much more central position on a campus with other facilities for the community such as can be seen in Platt Bridge where a new school, a new library and health facilities have been built close to each other and which have also contributed to the regeneration of the area.

I would be happy to discuss these matters with anyone who wishes to contact me.
Posted by Cllr Nigel Ash at 07:44 1 comment: Links to this post 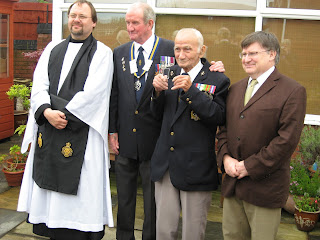 It was a great pleasure to be invited to the presentation ceremony of the Royal British Legion Award for Meritorious Service - Gold Badge to Stanley Southworth at Ian McCartney's house on Sunday.

Stanley was born in Ashton in Makerfield in 1920 and served for six years in the Royal Navy, attaining the rank of Petty Officer.

During World War Two he saw service at Dunkirk, returning for D-Day. His contribution was recognised in 1994 by the French Government for his service to their country.

Stanley joined the Royal British Legion just after World War Two and has served in the Ashton Branch since 1981.

A well known and popular man in the town he switched on the Christmas Lights in 2007 and he actively participates in the Poppy Appeal every year. At 89 years of age he still insists on delivering poppies to outlets and can be seen selling poppies in the the town centre before Remembrance Sunday. Stanley attends every parade.

Given Stanley's hard work for the local British Legion this award was long overdue and fully deserved.
Posted by Cllr Nigel Ash at 11:36 No comments: Links to this post

Wigan Council have announced tha the Scoot system will be up and running this week after long delays This system is a traffic light system which monitors the amount of traffic and the length of time that the lights stay on green to allow more vehicles to drive through busy roads. As a result traffic should flow more freely through the middle of Ashton.
Posted by Cllr Nigel Ash at 11:28 No comments: Links to this post 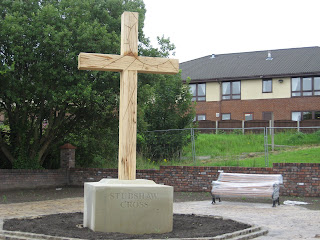 Here is a picture taken yesterday of the Stubshaw Cross gardens. It is certainly progressing well.
Posted by Cllr Nigel Ash at 11:23 No comments: Links to this post

I was very happy to support the following motion put forward by Independent Coucillor Gary Wilkes and later amended by Lord Peter Smith which was accepted by Councillor Wilkes. Councillors from every party represented on the Council voted for this motion which read as follows:


This Council views with grave concern the implications of the amount of people in the Borough that voted BNP in the European Parliamentary elections that took place on Thursday June 4 2009.

We, as a Council and individual Councillors, must pledge to the people of this Borough that we will work harder to understand their concerns and support policies that promote jobs, better housing and fairness for all

If this is to work successfully all party leaders that support these values must pledge to put their differences to one side and fight those who may act like a wolf in sheep's clothing in working against these values.

The result of the vote was as follows:

Abstentions 0
Posted by Cllr Nigel Ash at 11:28 12 comments: Links to this post

Work on Library Street, Hewlett Street and Millgate begun on 8th June and the works to the Wiend commenced the following week.

The works will mean that on street parking around the site will be greatly reduced from now on. Parking services are fully involved in the planning of this work but it will inevitably mean some initial disruption for those people that regularly park in this area.
Posted by Cllr Nigel Ash at 13:42 No comments: Links to this post

Beat it Team - report from last clean up

Land at end of Hodnet Drive (by cut through to Captain’s Lane)
Litter pick and cut back overgrowth on the footpath and removed fly tipped waste.¼ tonne removed

The next time the Beat it Team is in Ashton will be from the 17th to the 21st August. Please let me know if there is an area you know of that needs cleaning.
Posted by Cllr Nigel Ash at 13:36 No comments: Links to this post

If anyone was in any doubt about the racist and in this case muderous nature of Nick Griffin and the BNP they should listen to his solution to solving immigration - sink any boat that has immigrants on it.

He has told a BBC reporter that the EU should sink boats carrying illegal immigrants to prevent them entering Europe.

The MEP for the North-West of England said the EU had to get "very tough" with migrants from sub-Saharan Africa.

Pressed on what should happen to those on board, he said: "Throw them a life raft and they can go back to Libya".

I don't think I need to comment, except to say that even the far right European MEPs in the European Parliament won't work with Griffin

If you want to help counter this poison log on to the Hope not Hate website on http://action.hopenothate.org.uk/sinktheboats
Posted by Cllr Nigel Ash at 17:39 23 comments: Links to this post