Much needed road works have commenced in Heath Road on Monday 29 October 2012.

The contractors, Bardon Contracting Ltd, have programmed the works over a two week period.


Due to safety reasons it is considered impractical to attempt to carry out these works and still maintain a safe flow of vehicular traffic. It is for this reason that a road closure incorporating a local diversion has to be implemented during the contractor’s presence on site.

Well done to the Town Green Residents Association, Stubshaw Cross Residents Group and Friends of Ashton for being presented awards at the prestigious North West in Bloom finals held in Southport. Both groups won praise and prizes from the judges for the work they have done on their gardens.


North West in Bloom is run by the Royal Horticultural Society (RHS). It assesses areas based on a series of criteria including community involvement and participation, landscape improvement and presentation. Volunteers across Wigan Borough, with the help and support of the council, have transformed their environments. A special celebratory reception for all the volunteers will be hosted at Wigan Town Hall later this year.


Town Green residents Association. This group were also won a National Award for their garden their represntatives have recently been to Guernsey to receive this award from the RHS.


Posted by Cllr Nigel Ash at 10:42 No comments: Links to this post

Following the incident in which lolly pop lady Karen Littler was knocked down by a motorist while  holding up traffic at the busy Warrington Road/ Liverpool Road junction both myself and Bryn Councillor Ann Rampling voiced our strong concerns to Wigan Council about the potential dangers of this junction. 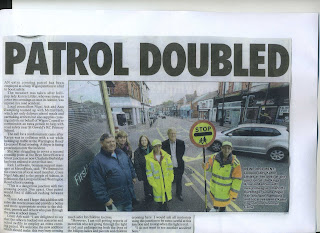 Posted by Cllr Nigel Ash at 17:35 No comments: Links to this post

The following areas were tidied up earlier this month by the Beat it Team.


1 Peter Street - gated area
2 The strip of land behind no 20 + 22 Princess Ave
3.Area behind 4A Hilton Street there is a strip of land that was made into a garden
4. The footpath from Captains Lane to Princess Rd
5.The footpath from Ashton Health to Golborne Rd
6. The footpath along the edge of the Town Green Garden then behind houses leading to Captains Lane
7. The footpath on Ashton Heath 8 Main Pathway (length of Heath) - this was partly tidied up.
If you know of any area in Ashton that need cleaning up please contact myself, Bill Clarke or Joel Haddley.
Posted by Cllr Nigel Ash at 16:35 No comments: Links to this post