Save our Library campaign continues 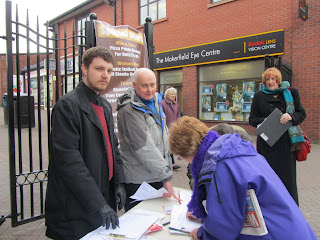 Our Save Ashton Library campaign took another step last Saturday when we held a street stall on the Gerard Centre. We were delighted with the response - nearly 500 people signed the petition. So far 70 people have signed the on line petition which can be found on http://www.ipetitions.com/petition/saveashtonlibrary/

We will be presenting these two and other petitions which other people have started to Wigan Leisure and Culture Trust at the end of this month.

As from February 2011 the number of questionnaires issued by and returned to Ashton library stands at 250. This is the 4th highest number in the Borough - Atherton, Standish and Shevington have submitted more questionnaires than Ashton
Posted by Cllr Nigel Ash at 10:24 No comments: Links to this post