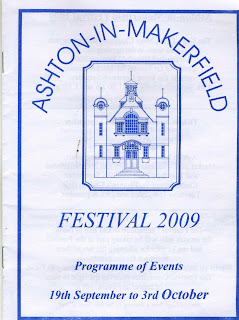 The Ashton Festival is taking place from the 19th September to the 3rd October. Once again there is a very full programme of events.

As a result of writing to every house on Weavermill Park explaining what the new PACT scheme was aiming to achieve several resident contacted me regarding an area of open space on the Estate which is suffering from litter problems and dog fouling.

Unfortunately I have discovered that the area is still owned and has to be maintained by the Developer Persimmon.Eventually the Council will adopt the land which could possibly be some time next year.

I will be contacting Perimmon to ask them to maintain the land in question.

Other areas that residents have contacted me about are: 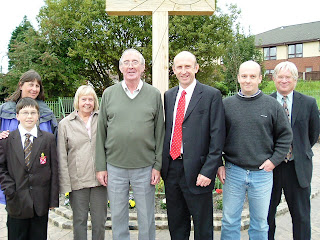 Pictured above at the Heritage Garden - John Healey with Ken Barston, Secretary of the Stubshaw Cross Residents Association with residents 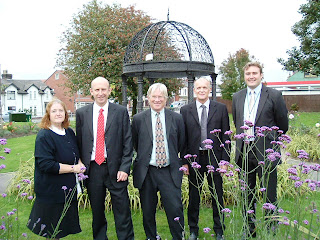 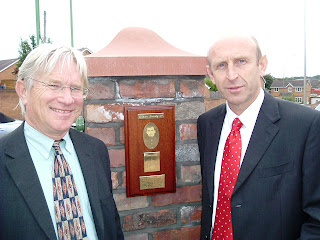 Pictured above John Healey and myself by the plaque commemorating William Kineally VC.

By coincidence John Healey, Minister for Local Government, who I mentioned in the previous blog entry visited Ashton last week as a part of a tour of the North West. Before going on to Wigan Town Hall he came to view two very successful local projects, the Town Green garden and the newly opened Stubshaw Cross Heritage Garden.

He showed a keen interest in the two projects and was especially taken by the plaque for William Kineally VC - I was told later that he is very interested in military history.

At the Town Green site the Minister met representatives from the residents group,Wigan Council and United Utilities who briefed him on the work that was undertaken to prevent flooding in Ashton.

Ken Barston and a group of residents met him at the Heritage Garden and gave him an account of how the Garden came about.

Everybody who met him found him very likeable and residents told me that they were impressed by the genuine interest in their project. He in turn was very impressed by the projects he had seen and praised the hard work that had obviously gone onto them.
Posted by Cllr Nigel Ash at 18:56 No comments: Links to this post

New Council homes to be built in Wigan

Housing Minister John Healey has given the green light for work to begin building over 2,000 new council homes that will help create over 5,000 jobs in the construction industry.

Wigan is one of the seven councils in the North West who will receive a part of the £127m government funding to build the homes.

Wigan will build 14 new homes at a cost of more than £1.8m, with £980,000 coming from the government and match funding from the council.

Eight homes will be built in Windsor Avenue, Astley, and a further six will be constructed in Etherstone Street, in Leigh.

This is the biggest council house building programme for almost two decades and it will be the first new council houses Wigan borough has been allowed to build since 1985.

Construction will begin on the first sites before the end of the year.
A second wave of projects is expected to be announced in the autumn.

This major cash injection is part of the Prime Minister's £1.5bn Housing Pledge announced in Building Britain's Future in June.

They had to represent value for money, help meet specific local housing needs and be able to begin construction before March 2010.
Posted by Cllr Nigel Ash at 09:19 No comments: Links to this post

Following a series of break ins to shops in the town centre police have arrested a male offender who has admitted responsibility for the burglaries.
Posted by Cllr Nigel Ash at 08:46 No comments: Links to this post 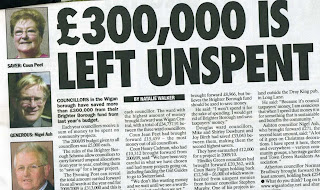 It was with some pleasure and satisfaction that I read in the Wigan Evening Post that I was the second most generous councillor in all of the Wigan Borough when it comes to giving out public money to local groups - see report above dated 9th September.

One of the projects that I gave money to is pictured above - the Stubshaw Cross Heritage Garden and the plaque commemorating William Kineally VC
Posted by Cllr Nigel Ash at 08:24 No comments: Links to this post

Scenes from the opening of the Stubshaw Cross Heritage Garden 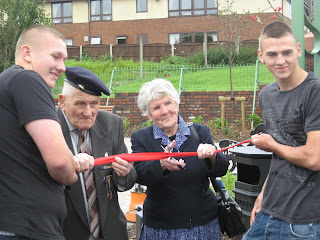 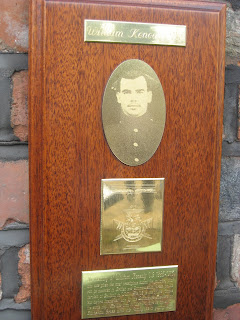 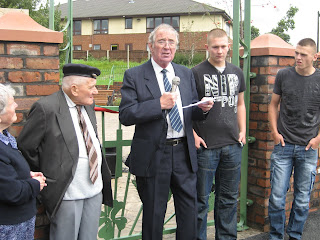 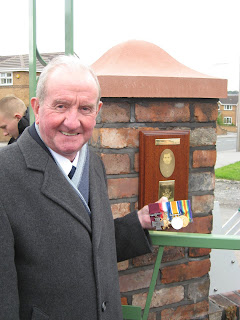 Latest report from the Beat it Team

3.Strip of land between Warrington Rd and back of houses on Chetwode Ave.
Ivy and weeds strimmed and litter picked.

If you know of any other area in Ashton that needs tidying up please let me know.
Posted by Cllr Nigel Ash at 18:40 1 comment: Links to this post