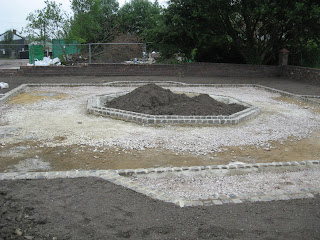 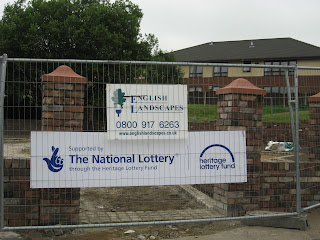 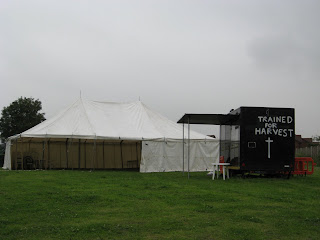 And also that the Town Green was being used as a venue for a Christian Festival - see photos above
Posted by Cllr Nigel Ash at 13:29 3 comments: Links to this post 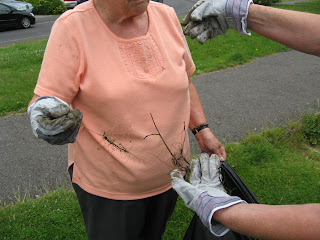 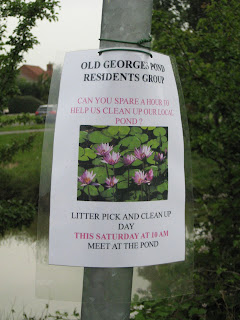 The Old George's Pond residents group organised another successful litter pick on Saturday in which several local residents took part. There was noticeably less litter this time but the residents did comment on the amount of fishing line left in the pond. (see picture above)

As a result I have asked the council to trawl the pond regularly so that this becomes less of a danger to wildlife inhabiting the area.
Posted by Cllr Nigel Ash at 13:20 1 comment: Links to this post

Town Centre regeneration - the next phase in Gerard Street

The next phase of the town centre regeneration will take place soon when contractors will be working on the only paved area yet to be renewed. This should start around the 13th July 2009
Posted by Cllr Nigel Ash at 13:04 3 comments: Links to this post

Upgrading of pavements and road surfaces 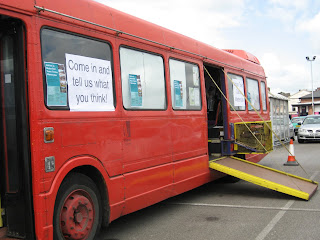 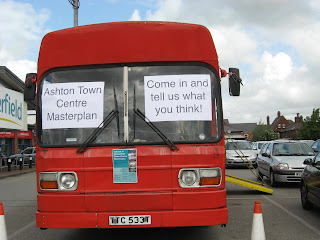 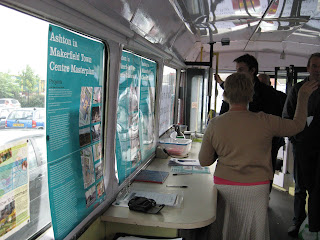 These photos were taken last Friday on the Gerard Centre at the beginning of the consultation exercise regarding the Town Centre and the LDF plan - see previous blogs.
Posted by Cllr Nigel Ash at 11:41 No comments: Links to this post

The new PACT initiative which is tackling 'crime and grime' at a local level has been a great success. As a local Councillor I can contact one specific officer in the Council who is responsible for my area and as a result matters can be dealt with much quicker than before. An example of this is graffiti. I have reported two incidents of graffiti recently and they were cleaned up within two days.

It is interesting that in a recent survey 88% of respondents were fairly/very satisfied with Ashton as a place to live but only 47% felt that the Police and Council were successfully dealing with issues. The main areas of concern in this survey were problems with teenagers,crime and litter. Exactly the things that the PACTs were set up to deal with.

Here are just some of the problems in the area that the PACT team are tackling:

2. Heath Road/York Road youths causing general ASB
Progress has been made in this area as the PCSOs report youths in the area of Heath/York road are engaging with GMP and are now generally very well behaved
.
3. Dog fouling : Heath Road, Princess Road, North Street
In Heath Road people not disposing of the dog bags properly. There is now an anti dog fouling campaign in progress. Leaflets will be distributed to all houses in the areas. Dog poo bags are available in local outlet and signage will be erected
PCSO’s are to issue fixed penalty notices (FPN’s) and there is a prevention and education campaign in local schools

7. Graffiti – all over Ashton. There is a very quick response to cleaning it up once reported

If you know of any issues that the PACT team should deal with please contact me.
Posted by Cllr Nigel Ash at 07:47 No comments: Links to this post

You will see from page 7 of the Your Borough section of Borough Life that Stubshaw Cross has been designated to provide jobs on the majority of the land marked in purple and a replacement High school as part of the Schools for the Future programme.

On the issue of industrial development my view has not changed since I wholeheartedly supported the MAD campaign which was successful in stopping a proposed development of warehousing in the area.

On the issue of a new school I have publicly backed the plan supported by Ian McCartney and local Headteachers to site any new school in the middle of Ashton as a part of the regeneration of the town centre and to make it accessible to all members of the community not just pupils 11-16. I am not convinced that siting a school in Stubshaw Cross fits this criterion. Please let me know what you think.

This document is subject to consultation and you have until the 4th August to make your opinions known. For further details of how to let the Council know your opinions see page 8 of Borough Life - Your Borough.
Posted by Cllr Nigel Ash at 11:57 10 comments: Links to this post

Ashton Town Centre - have your say

Now on June 19th representatives of BDP will be in the Gerard Centre with plans and pictures of how they see the way forward for Ashton Town Centre and they will want your opinions of their plans to improve the centre.

If you can't make it on June 19th then the exhibition will move to the library for two weeks.
Posted by Cllr Nigel Ash at 11:37 5 comments: Links to this post

Here are the election results for the Borough of Wigan. From my point of view the most disappointing thing was the turn out - just 27%.

Clearly the Labour Party were given a massive thumbs down from the electorate and it is up to us to listen to what the public are telling us and bring in policies that will resonate with the public especially in relation to public housing, jobs and immigration.

At a local level I will continue to work with groups and local people and continue to canvass their opinions. I am sure that local people will tell me exactly where we are going wrong.
Posted by Cllr Nigel Ash at 21:06 4 comments: Links to this post

I foolishly wrote on this blog that things can only get better politically - and then the results from last night came through. The most disappointing result of the night was the fact that the BNP had won a seat in the North West and that their leader would be an MEP for the area. It is terrible news for our country.

I will state very clearly that while the BNP will take a seat in Brussels they will not represent me - they are not going there in my name.

The Hope not Hate campaign has just launched a petition saying just that: BNP - not in my name. They will deliver this petition to the European Parliament on the first day that their MEP takes their seat. 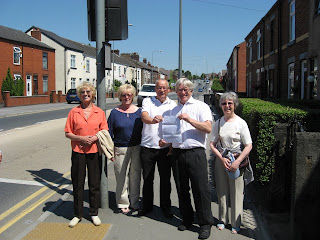 Since becoming a local councillor I have campaigned for safer pedestrian crossings along Bolton Road. This road is nearly impossible for pedestrians to cross because from the town centre to Riding Lane there is only one pedestrian crossing. Otherwise you take your life into your hands when crossing this road.

With this in mind I was very happy to help a local resident Arthur Jones who has organised a petition requesting that the traffic lights at the junction of Bryn Road and Bolton Road should be converted to a pedestrian controlled junction and that the time delay between traffic stopping on Bolton road and traffic moving out of Bryn road be increased to give pedestrians more time to cross the road.

Mr Jones, local residents and myself presented the petition signed by some 200 people to Deputy Leader of the Council David Molyneux. I will be having a site meeting with a senior council official and residents in the near future to see what can be done to improve safety at this junction.
Posted by Cllr Nigel Ash at 15:29 4 comments: Links to this post 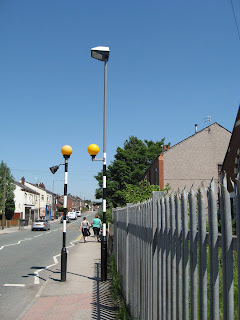 When I decide to finish as a Councillor or I am not elected, one of my proud boasts will be that I managed to get not only a new bulb for the light in the pedestrian crossing on Bolton Road but also improved the lighting there so that motorists can actually see it in the dark as they approach.

The picture is proof of my efforts - after four years of cajoling the Council.
Posted by Cllr Nigel Ash at 15:17 4 comments: Links to this post 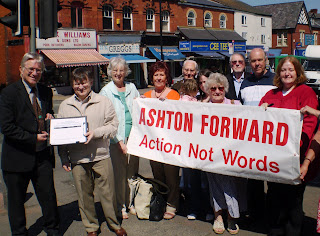 Straight after helping with this litter pick I went to a very emotional meeting where Ian McCartney MP told members of the local Constituency that he was standing down as MP for Makerfield at the next general election due to health reasons.

I personally found Ian's decision both upsetting and understandable. I have worked with him in different ways since 1987 when he was first elected as MP for Makerfield and have seen at first hand how driven he is to make things better for the Constituency and his constituents.In that time I have also been struck by the respect paid to him by people of all walks of life regardless of their political views.

I list below just a few of his achievements

Minister of State at the DTI following Labour's landslide victory in 1997. Here he was responsible for the introduction of the first ever right to paid holidays and the National Minimum Wage.

Minister of State at the Cabinet office

Minister of State for Pensions at the DWP

His campaigns have included the registration of bouncers and compulsory fire retardant materials for furniture - a measure which must have saved thousands of lives since its introduction. He played a leading part in securing a large investment for flood prevention in Ashton following the floods of 2002. And finally he is in the forefront of campaigning to get more resources for Ashton town centre

Whoever wins the seat at the next election Ian will be a very hard act to follow..
Posted by Cllr Nigel Ash at 14:06 1 comment: Links to this post