Listening to members of the public 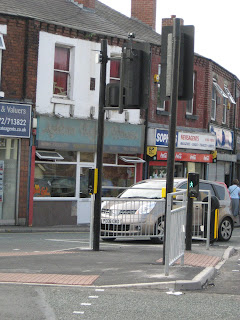 Ashton's new traffic control system at the junction of Bolton Road, Gerard Street, Wigan Road and Princess Road can be quite misleading. The pedestrian hoping to cross from Bar Aqua to the pedestrian island will see two line of metal studs, at the end of which they will see an illuminated "Little Man". They might suppose that when he is green it is safe to go; but this is not the case. This is when traffic may flow across this crossing point. In fact, the only time that it is safe to cross is when traffic is flowing from Wigan Road. The chest-high "Little men" signs on the traffic light pillars do in fact quite rightly indicate this, but may be overlooked. How much better it would be if the former "Red and green men" situated at the top of the traffic light poles directly facing the crossing points were reinstated"

So I went to look for myself and he was right. I went to cross the road from the Bar Aqua thinking it was safe but in fact the red man was showing.

I have reported this to the Council and they have promised to rectify the matter.
Posted by Cllr Nigel Ash at 08:43